You are here: Home / Beauty / 5 Things Cryotherapy Does to Your Body 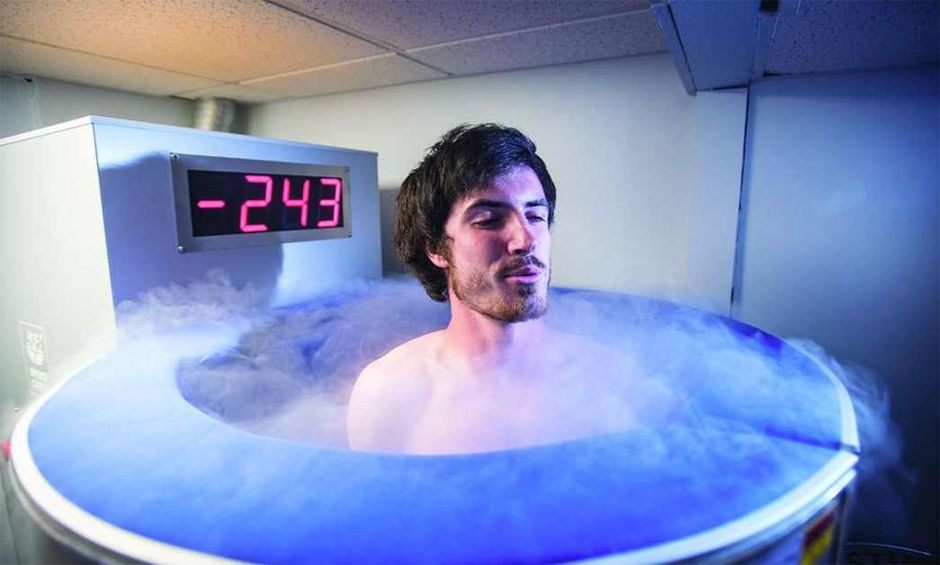 Heat and cold both play an important part in many different medical treatments. Sport injuries for example, are often treated with either hot or cold compresses being placed on the injured area to help with swelling and to reduce the pain being felt by the individual.

There are a number of different medical treatments that offer relief to a variety of ailments and pains, and cryotherapy is proving to be one of the most popular over the past few years.

Cryotherapy, also known as cold therapy, can be used for a range of medical conditions and is a technique that involves exposing the body (or certain parts of it) to extremely cold temperatures for short periods of time.

There are a number of ways that localized cryotherapy can be applied such as through the use of ice baths, ice packs (for specific areas such as the knee, ankle or wrist) or through coolant sprays.

There is also what is known as whole body cryotherapy that exposes the entire body to freezing temperatures. This is usually administered with the individual standing (or sitting) inside an enclosed chamber, with just their head being exposed at the top. The enclosure around the body will drop temperature to anywhere between minus 200-300°F, where the patient will stay for around three minutes.

Where is cryotherapy performed?

Depending on the specific treatment that an individual needs, it can take place inside a hospital or a spa center, such as one offering cryotherapy services in Lubbock, as well as other non-surgical treatments. There are also some sport centers that have the facility available for their members.

In addition to treating issues such as muscle pains and aches in the joints, some doctors also use a more localized form of cryotherapy to treat various ski conditions such as skin tags or warts. In some cases, it can even be used to freeze off cancerous cells from the body.

Though it is a relatively safe form of treatment, it might not be suitable for everyone. There are some people who should avoid cryotherapy, such as pregnant women, people who suffer from high blood pressure or children.

There are a number of benefits from cryotherapy, and it is fast becoming one of the most popular forms of treatment for people that are suffering from a range of conditions including sport injuries, pain relief, arthritis, sleep disorders and many others.

Below we will take a look at five of the benefits and what cryotherapy does to the body.

Arthritis is a condition that affects millions of people all over the world. In the USA alone, there are more than 50 million adults who suffer from a form of arthritis. Cryotherapy has proven to offer relief to sufferers, and exposing the body for just 3 minutes or less to the extreme cold temperatures can help lessen the pain caused by swollen and inflamed joints.

Localized cryotherapy can also work very well with arthritis, and applying cold compresses to specific parts of the body where pain resides is also very beneficial.

In fact, it has helped with medical professionals being able to provide a slightly more aggressive form of physiotherapy to an individual after they have had cryotherapy, making the rehabilitation programs much more effective.

Pain relief and healing of the muscles

Muscle pain is something that can affect everyone, regardless of whether or not they have been physically active. Ice packs and compresses have long been used by doctors and sports physicians who will apply them to the injured muscles or joints.

Cryotherapy has also been used to help individuals recover after undergoing surgery. Many surgical procedures will leave the patient with swelling and bruising, along with great amounts of pain, and cryotherapy has been proven to be a big success in alleviating the pain in individuals post-surgery.

Some of the benefits of the treatment after surgery include a boosting of the immune system, greater flexibility, general pain relief and the reduction of inflammation caused by the surgical procedure.

Helps with the symptoms of migraines

Migraines are something that many people the world over suffer from, with more than 50% of adults in the USA suffering from them and needing to take time off work.

There are a number of migraine treatments that one can take, and though it’s a condition with no known cure, there are treatments available that can help reduce the pain and intensity of a migraine attack.

Cold therapy has been used to treat migraines for many years, and ice packs applied to the head or even ice head baths, have proven to be a successful treatment.

It works when the head and neck is suddenly exposed to the cold temperatures of the ice pack or bath, with the blood vessels being constricted, which leads to a reduction in inflammation, as well as sensitivity to light and also pain.

Helps with Depression and Anxiety

Whole body cryotherapy can lead to a number of physiological hormonal changes in the body, which in turn lead to the release of adrenaline and endorphins. These happy hormones will offer some balance to the high cortisol levels that people may have, which is a hormone that induces stress.

If you are someone that suffers from anxiety or depression, then cryotherapy can have a very beneficial effect on your overall mood. A study that was conducted back in 2008 found that symptoms of anxiety or depression were reduced by around 50% in about a third of the people who took part in the study.

Though cryotherapy won’t help with the main causes for depression or anxiety, it is a good way to help reduce the symptoms and offer the sufferer a little light relief, even for just a short period of time.

There are many types of skin conditions that affect millions of people all over the world. Eczema is one of the most common, which is a chronic inflammatory skin disorder that leads to various patches of itchy and dry skin on the sufferer.

Cryotherapy has been an effective treatment for such conditions with a number of people suffering from eczema noticing that their symptoms have lessened quite dramatically after treatment. It is said that regular sessions of cryotherapy can help to detoxify the skin, as well as being able to replenish it with the natural minerals and nutrients of the skin.

Massage therapists are today focused on wellness and illness … END_OF_DOCUMENT_TOKEN_TO_BE_REPLACED

The global economy is under threat and facing a pandemic … END_OF_DOCUMENT_TOKEN_TO_BE_REPLACED

Our bodies are truly unique when it comes to protecting … END_OF_DOCUMENT_TOKEN_TO_BE_REPLACED

Everyone wants to look beautiful. Some people are blessed in … END_OF_DOCUMENT_TOKEN_TO_BE_REPLACED