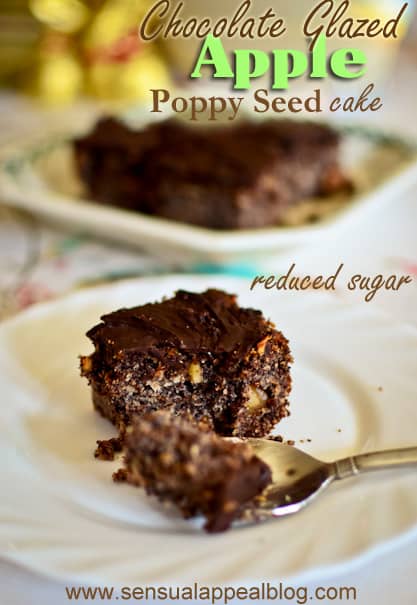 Our Easter table had a surprising dessert.

Poppy seed desserts are among my favorite type of desserts. We usually have Lazanki for Christmas Eve which pretty much makes my whole Holidays: it’s my absolute favorite Holiday dish. For Easter we usually have a Makowiec: a poppy seed roll cake. We had it store-bought for Easter as you saw in the pictures from Sunday. But this year, my mom surprised us with something even better, something I didn’t expect.

Apple Poppy Seed Cake with a Chocolate Glaze. She outdid herself again! Such an amazing cake. 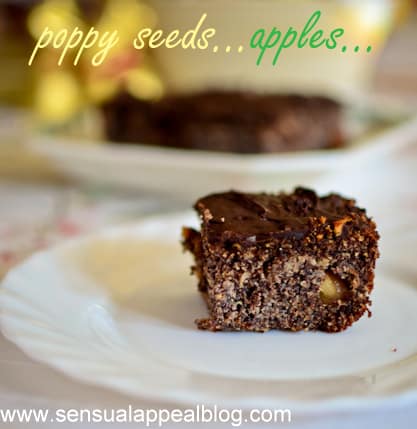 Truth be told, I didn’t even realize it contained apples. I didn’t notice them. When my mom was telling me the ingredients for the recipe, I was stunned that there were 3 large apples in there! But then it made sense, because you can see the grated apples in there once you look, it’s just not a prevalent flavor at all – poppy seeds tend to have an overpowering flavor in themselves. The apples surely give a nice and subtle sweetness and tartness to add to the complexity of the cake.

The cake itself contains some ingredients that may be unfamiliar to you, because it’s a Polish recipe. My mom tends to use many Polish ingredients from the Polish store since her recipes are originally from Poland. The poppy seed package she used was 12 oz and you can buy them online; be sure to grind them twice through as stated in the recipe! Then there’s the kasza manna, instant semolina. Truthfully, I haven’t ever used the American version, I’m not sure how semolina compares to kasza manna, whether it’s exactly the same thing, but when we Googled we found that it’s the equivalent so I’m thinking it should work out well. If you do use it, I would love to hear your experience with using it.

Lastly, don’t be intimidated. It’s a truly amazing cake, you will not be disappointed.

Massage therapists are today focused on wellness and illness … END_OF_DOCUMENT_TOKEN_TO_BE_REPLACED

The global economy is under threat and facing a pandemic … END_OF_DOCUMENT_TOKEN_TO_BE_REPLACED

Our bodies are truly unique when it comes to protecting … END_OF_DOCUMENT_TOKEN_TO_BE_REPLACED

Everyone wants to look beautiful. Some people are blessed in … END_OF_DOCUMENT_TOKEN_TO_BE_REPLACED