I hope you’re excited because my favorite post about New York City is here! Well, besides the post about my Chocolate Tour. This is my second favorite because I love sweets and desserts and this post is all about the different bakeries and desserts I tried in NYC! If you love cupcakes, cookies, frozen yogurt, and more… you’re in for a treat! Enjoy and make sure to respond to my questions at the bottom of the post. I’m curious about your answers! 🙂

On the top of my list of bakeries to try in New York City was Baked By Melissa. I had a couple of people urging me to try it out and that it’s a definite must when in NYC. So obviously, I had to try it, especially since this bakery has so many locations. Seriously, I walked by so many when just walking around. The one I actually went to was in Times Square. It was a pre-lunch treat. 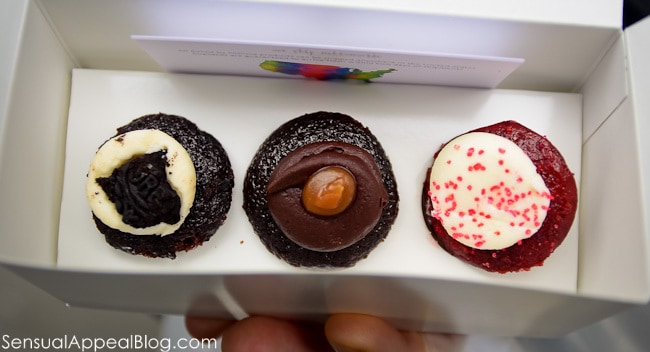 You could buy 3 cupcakes for $3. Not a bad price – $1 per cupcake. I chose Cookies & Cream cupcake, Peanut Butter Chocolate cupcake, and Red Velvet Cupcake (yeah, I’m starting to get over my resistance to Red Velvet desserts). They would have been worth it, except…. 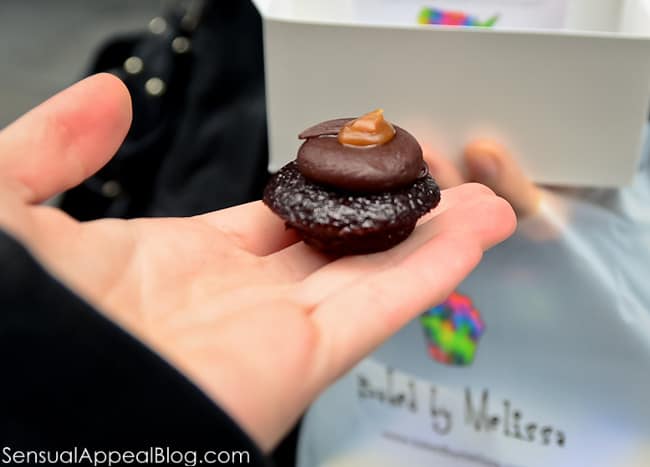 They are just so darn tiny! Sure, they’re cute. Adorable, in fact. But it’s a three-biter if you take small bites. My dad, a big biter, would have swallowed one whole cupcake in one take. If he was with us on our trip, I bet he would have laughed. Meh. Okay, but what about the cupcake itself, besides for its smurf size? The taste was… I don’t know, it was decent. It was normal. Nothing spectacular. It was just a regular cupcake. I didn’t really taste that much cause of the size and I didn’t feel very satisfied after this quick dessert trip. I doubt I’ll come back to Baked By Melissa again unless it’s for catering mini cupcakes for a celebration. I bet they would be perfect for a baby shower or a birthday or something, because they are cute. But that’s about how far as that goes.

The other dessert I’m going to highlight is something we bought at Li-Lac Chocolates during our Chocolate Tour of New York City. Since it’s a purchase we made, I didn’t show you guys what it was on the post about the chocolate tour. Well, as I mentioned in the original post, this chocolate shop had a sale for Easter chocolates at buy one, get one free. 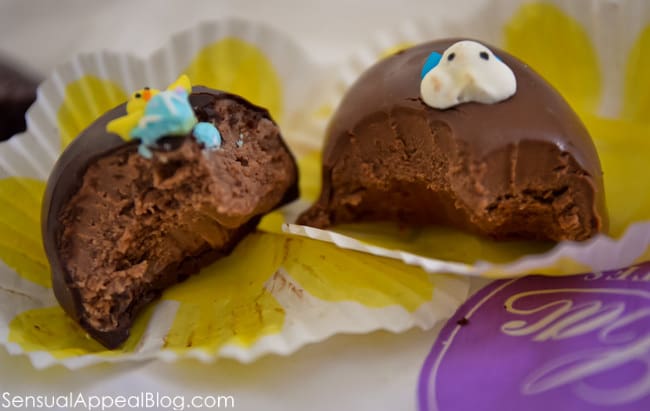 Overall, I found both of the chocolate eggs to be way too decadent and heavy. They were one of the heaviest and decadent chocolate treats I have ever had and it was just kind of difficult to eat because of it. It was a shock of intensity and overload each time I took a bite. I wasn’t a fan.

Another purchase that was made during our chocolate tour of New York City happened at Pasicceria Bruno Bakery & Cafe. I wish I remember the name of the first treat I’m gonna show you… I don’t know why I didn’t write these things down. I guess you live and you learn. But anyway, the first dessert, or baked good rather, was this meringue-looking thing. It was just like a meringue except a little different, it had nuts inside. It was decent but I wasn’t too crazy about it. My mom liked it though. 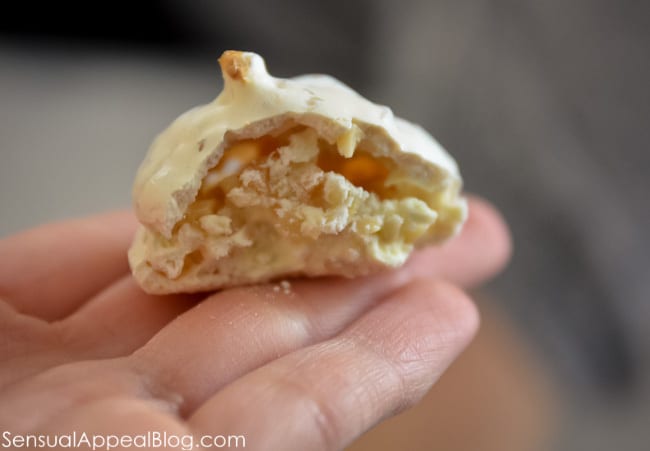 See? Looks like meringue but with chunks of nuts inside (and maybe something else?). It was just a slightly different texture from regular meringues, it was not as light. And the taste was a bit different. Gosh, I’m terrible at describing things.

Since I’ve never had macaroons before, I had to buy one here. They were big and they had a lot of nice flavors. We picked a mocha macaroon to try. My mom didn’t like it that much because she said the filling was too buttery but I really liked it! I loved the mocha flavor because it wasn’t too strong but it was still prevalent. The filling was dreamy and it was interesting to bite into a sandwich that’s really a bakery treat. I like macaroons. Now I know this and I can’t wait to have another one someday. 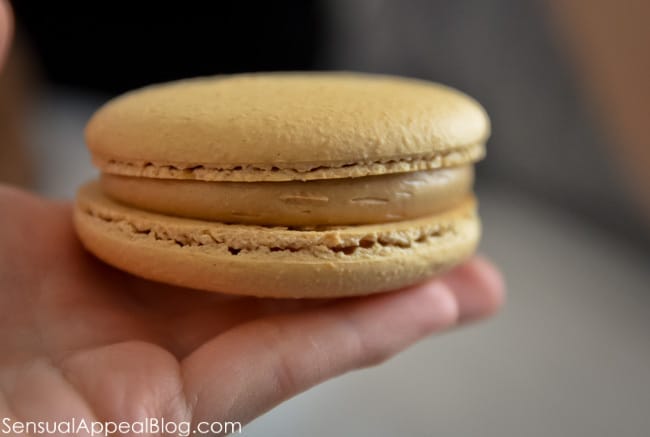 See how big it was? Half of my palm! So awesome.

I guess Holey Cream actually has a thing about ice cream in the name too but we didn’t try the ice cream so I’m not even gonna talk about that. This place was my absolute favorite from all of the bakeries and dessert shops I have tried during my stay in New York City. It was seriously THE BEST. And it was conveniently located in Hell’s Kitchen – only a few minutes away from our hotel. 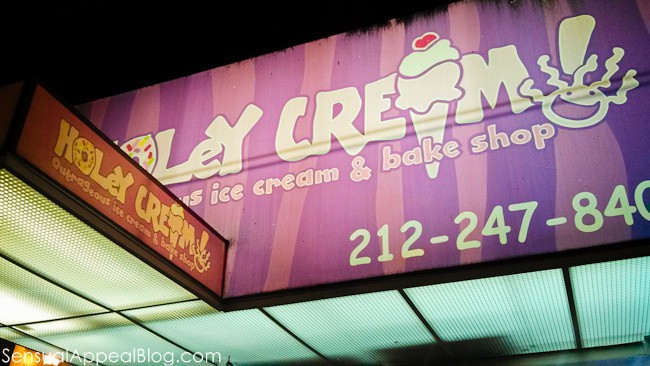 I instantly fell in love with this bake shop upon entering. I mean, look at all these cupcakes! So many choices, and they were big (sorry Melissa, but I like ’em big!) And if you’re more of a doughnut fan, they had an option to create your own doughnut where you can choose a flavor, coating and some other stuff. I don’t remember the doughnut specifics exactly because we weren’t there for donuts. We were there for cupcakes. Delicious, moist, big, decadent cupcakes! 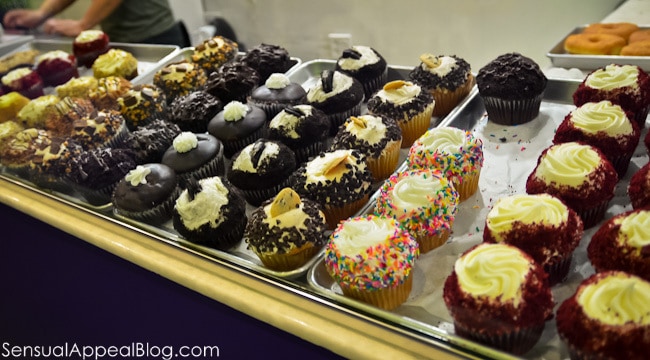 I chose a caramel turtle cupcake and my mom chose the double chocolate cupcake. We went to our hotel room to enjoy the sugary goodness. And… Oh. My. GOSH! It was heaven. I have never had such a good cupcake (well, Molly’s Cupcakes in Chicago might be a tie). Why did I like these cupcakes so much? They were amazing… the size was just right, they had a FILLING (that’s what usually gets me sold) and the flavors were just so mind-blowing. 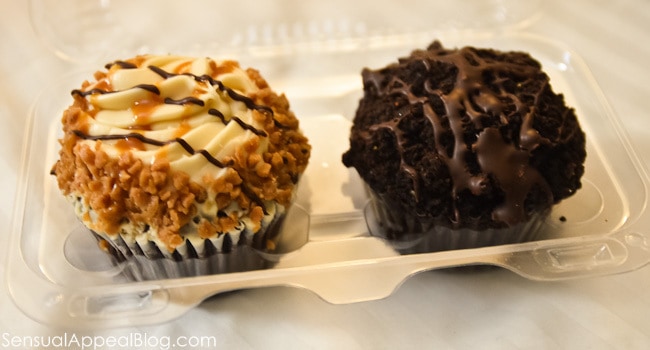 My mom LOVED her double chocolate one. It was everything she loved in a cupcake – it didn’t have a frosting on top (she’s not a fan of frosting because she finds it too heavy and buttery), and it was ultra dark chocolate, with a dark chocolate filling and a dark chocolate drizzle. I agree, it was very good and it was surprisingly not too sweet. Clearly, it was everything my mom could ever want in a cupcake. She made a great choice. I loved my cupcake more though, the turtle caramel was ideal for me – the frosting on top of the cupcake wasn’t overwhelming and there was a lot of filling inside. The caramel was delicious and decadent. It was pretty sweet but it was so delicious, I couldn’t resist.

We may or may not have gone to Holey Cream the night before our departure from New York City again 😉 We couldn’t help ourselves. It’s hands down the best bake shop/cupcake shop I have tried in New York City so far. If you visit NYC, you MUST try this place!

You knew this was coming. I love my Chobani yogurt and the Chobani Store in SoHo was on top of my list of places to try in New York City. I was very excited to try it. I made a date to meet up with Sylvia since she’s never had it either. 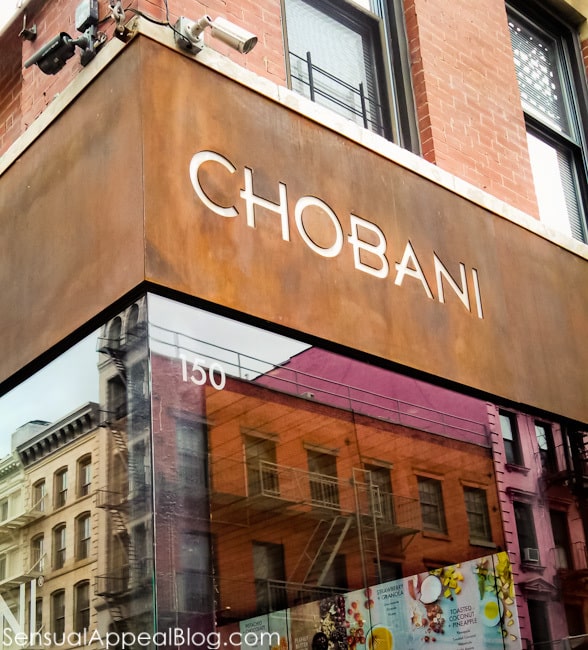 Chobani store had a nice variety of things to choose from, different yogurt concoction that were both sweet but also savory (they had one with lox! and cucumber! it was interesting). I settled for a peanut butter & jelly one. I’d been craving peanut butter and this one sounded very good to me. 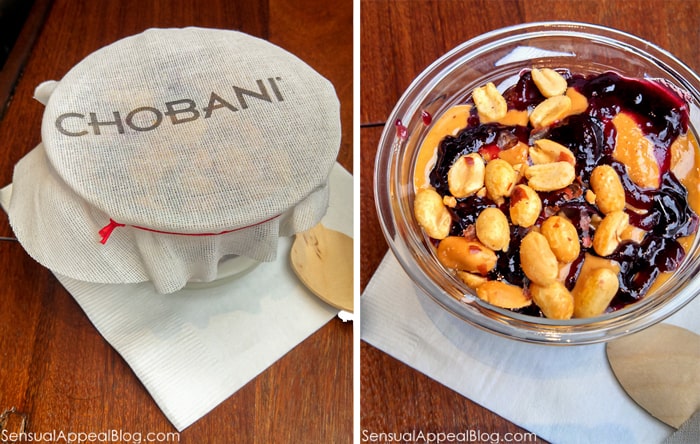 The concoction itself was good but it wasn’t anything I wouldn’t be able to make at home. In fact, it is something I could very easily make myself. It was just a regular Chobani plain yogurt with toppings on top. It wasn’t anything spectacular. But I liked the atmosphere of the place and the small Chobani creation was pretty cheap, especially since we got to keep the glass bowl with the purchase! Once you finish eating, you simply give them your diry bowl and they give you a clean bowl in return so you can take it home. That itself made it all worth it! I love freebies 🙂 And it’s a perfect size for a nice and quick yogurt treat I can make myself.

I’m used to eating some form of frozen yogurt at least once a week. I love me my treats, whatever. Tutti Frutti frozen yogurt shop was close to our hotel in NYC Midtown and I decided to make a stop there after running at Central Park while my mom was at her conference.

The whole time I was picking and sampling flavors I couldn’t help but think how much some healthy bloggers would love this place. There was a good variety of soy frozen yogurt flavors to choose from – perfect for vegans. The flavors were pretty good too but I wasn’t too smitten with them. I like our frozen yogurt shops more back home. This one was also, unsurprisingly, more expensive. I disliked the fact that the fruit for toppings were not cut into small pieces but were pretty big. I like having small pieces of fruit for my toppings so I didn’t choose the fruit, instead I chose the little poppy (bursty?) balls (whatever those are called). They had two different flavors: strawberry and mango, which made me happy. I love those little balls. Nomz.