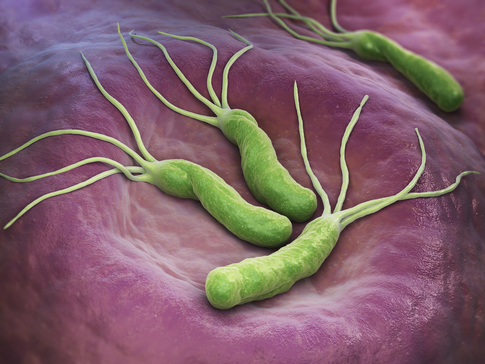 Are you aware of Helicobacter pylori bacteria (h. pylori)? Well you should be, because more than half of the human population is host to this spiral shaped bacteria.

The reason most of us don’t realize this, is because most of see no symptoms throughout our life. Lately, it is also becoming a challenging medical problem. According to a study released by Centers for disease control and prevention (CDC) in 1998, 80 percent of gastric ulcers are caused by H. pylori bacteria.

How does the h. pylori bacterium affect your body?

Web Md states that helicobacter pylori are a common type of bacteria that grows in our digestive tract. Mostly it attacks the stomach lining and intestines, causing sores. These sores are called as ulcers and can sometimes be harmless and easily treated by medicines. But some ulcers can even be life threatening as they may cause stomach cancer.

Some common symptoms of h.pylori bacteria

These bacteria are present since childhood and sometimes might go undetected because there are no visible symptoms. But, if you are constantly irritated by your stomach or see any of these symptoms then it is highly advisable that you see a doctor.

According to Shannon Brosek of Medical News Today, h. pylori bacterium is typically treated by a treatment known as triple therapy. This treatment includes 2 antibiotics (amoxicillin, clarithromycin) and a proton pump inhibitor (PPI) for 14 days.

A recent study on the effects of this therapy posted on the Galen medical journal quotes that “This multi-drug application is associated with remarkable side effects and sometimes patients do not complete the treatment course”. The major reason for the failure of treatments is due to h. pylori being resistant to common antibiotics.

Also this therapy is not cost effective and the duration is quite long. And there is always that fear of the treatment being unsuccessful. So there have been numerous studies and discussions around how to effectively eradicate or treat h.pylori. To find a treatment which is:

Well the answer is simple! Treating it naturally. Natural treatments are truly cost effective and it obviously prevents the body from many side-effects. But natural treatments don’t fully eradicate or treat h.pylori. it just helps in maintaining harmless levels of the bacteria.

Although there are many who believe in the healing properties of apple cider vinegar, especially in the treatment of h.pylori bacteria, there are some who think otherwise.

And taking apple cider vinegar(not apple cider!), thinking that it will replenish the acid levels of the stomach, is equally incorrect. Because, the reduction in the acid levels isn’t the actual problem caused by h.pylori. In fact, h.pylori isn’t even affected by the high acid levels in ACV as it is highly acid tolerant.

As for the studies in favor of using apple cider vinegar for H. Pylori:

A similar study concluded that treating h.pylori with vinegar had a success rate of 91 percent. The results were significantly better when compared to the latest antibiotic h.pylori treatments, which were around some 80 percent.

Apple cider vinegar acts as an antibacterial agent and that is why it is good for treating h.pylori bacteria. It is also a good source of pro-biotics. The way apple cider vinegar works is that it has a certain kind of acid which stabilizes the acid level in the stomach.

This way only healthy and necessary bacterium can survive in the stomach. Also apple cider vinegar increases metabolism and boosts digestion, which eventually soothes the stomach.

The correct treatment for h.pylori includes lowering the stomach acidity and apple cider vinegar might be counter-productive to that treatment.

You should always consult your doctor before taking any steps. This is not medical advice.

Even though ACV is not the most effective treatment for H. Pylori, if you’d still like to give it a shot(not advisable), here are some ways people have tried:

Massage therapists are today focused on wellness and illness … END_OF_DOCUMENT_TOKEN_TO_BE_REPLACED

The global economy is under threat and facing a pandemic … END_OF_DOCUMENT_TOKEN_TO_BE_REPLACED

Our bodies are truly unique when it comes to protecting … END_OF_DOCUMENT_TOKEN_TO_BE_REPLACED

Everyone wants to look beautiful. Some people are blessed in … END_OF_DOCUMENT_TOKEN_TO_BE_REPLACED