Ohhhh mama, how I love you so, for making this. 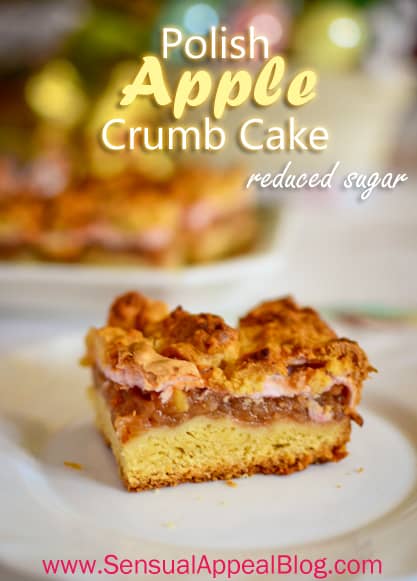 Man, this apple cake recipe was the BOMB diggity. As you can tell by all of the previous recipes that have been posted, they all contained apples in some form. I blame this on the Traditional Szarlotka (Apple Pie) I made a few weeks ago. My mom’s craving for apples has been going wild ever since and she got really into making apple-based desserts (she started with her own take on the Apple Pie… the rest is history…)

This Apple Crumb Cake appeared on our Easter table alongside the Poppy Seed Apple Cake. Both were amazing, both totally different. I couldn’t even tell that the Poppy Seed cake contained apples at first, whereas this one has a prominent apple flavor – clearly, since it has a delicious apple filling. It was prepared similarly to how we prepared the filling for our Traditional Polish Apple Pie and it was soo good but still with no sugar added! It was the perfect combination of sweet and tart, it was truly ideal! 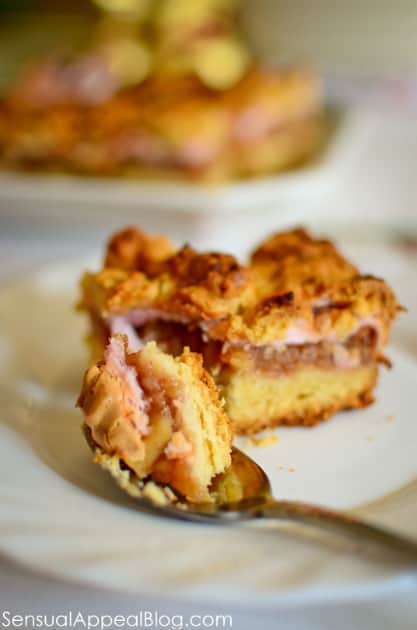 There is a strange ingredient here you might not recognize, unless you’re Eastern European. It’s called Kisiel (powder). Wikipedia says that:

Kissel (kisiel) is a fruit soup, popular as a dessert. It consists of sweetened juice, thickened with arrowroot, cornstarch or potato starch, and sometimes red wine or fresh or dried fruits are added.

That’s the traditional preparation of kisiel. Before it becomes a “soup”, it’s a powder in a package. The purpose of it here is to add a thin pink foamy layer to the cake. You can see it on the photos, it’s right above the apple filling layer. You can’t really taste it and the only purpose kisiel serves as an ingredient in this recipe is that it is red and it is a thickener. You can experiment with your own version by adding a bit of thickener of choice, like potato or corn starch, and a bit of red coloring. I have not tried it with this way but my mom says it should work.