Apple cider vinegar is all the rage in many natural health circles, and seeing how popular it has become, I decided to do some research into it and see whether it really lives up to the hype or not.

I dug around for scientific evidence for each of the proposed health benefits, and was able to find a few studies supporting the claims many people make.

However, I’d also like to point out that apple cider vinegar is by no means a cure-all for every ailment known to mankind.

Vinegar definitely has tons of health benefits and it seems apple cider vinegar even more so. My advice: take the following studies with a grain of salt and if you’re in doubt, consult your doctor!

You can certainly try some home remedies yourself and see how you respond to them, but again, these remedies are not meant to replace medicines!

This post is not a substitute for medical advice! In case of an emergency or a health problem, you MUST consult your doctor. 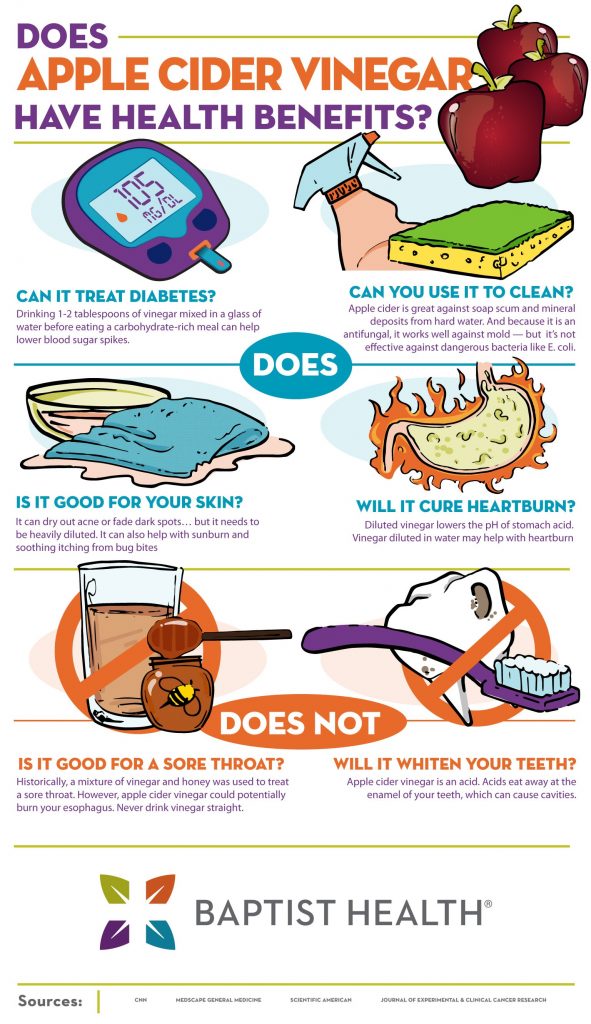 What is apple cider vinegar

Apple cider vinegar is a vinegar made by fermenting hard cider until the ethanol turns into acetic acid.

Apple cider vinegar starts out as apples. Apples are then pressed to make apple cider. At this point, the liquid is murky and has lots of residue in it – the typical apple cider.

Yeasts are introduced into apple cider to ferment the sugars into alcohol, which will result in what we know as hard cider.

Finally, a starter compound called “the mother” is introduced into hard cider which begins fermenting the alcohol into vinegar.

Once all the alcohol is fermented into acetic acid, the transformation is complete and the resulting substance is what we know as apple cider vinegar.

While many of the health food brands state that the “mother” is the magic substance in apple cider vinegar, there have not been any studies to support this.

However, I’d like to point out two important things here:

The lack of studies into something does not necessarily mean that it is ineffective.

On the flip side:

This can indicate that there is not enough anecdotal evidence to warrant a controlled study.

I believe apple cider vinegar should be used as a complement to medicine, not as a replacement.

Interestingly, apple cider vinegar is a weak acid, containing only 5-6% acetic acid. Still, it’s quite sour and having too much can cause discomfort and burn your tongue and throat.

Apple cider vinegar has been used as a remedy for common ailments for thousands of years, and in recent times, studies have shown apple cider vinegar(and actually acetic acid) to have a positive effect with cholesterol, weight loss, and controlling blood sugar.

Vinegar has been used for thousands of years for cleaning and disinfecting wounds. The acidic nature of vinegar kills harmful bacteria.

Hippocrates, the father of medicine, used vinegar for cleaning out wounds.

Vinegar can also be sprayed onto kitchen surfaces as a cleaner for a disinfected, fresh smell.

Additionally, vinegar can be added to foods to help preserve them and inhibit the growth of bacteria. Studies have shown that vinegar helps in preventing E. coli growth.

The effect of vinegar on blood sugar levels is perhaps the best-researched and the most promising of apple cider vinegar’s possible health benefits.

Several studies have found that vinegar may help lower glucose levels. For instance, one 2007 study of 11 people with type 2 diabetes found that taking two tablespoons of apple cider vinegar before bed lowered glucose levels in the morning by 4%-6%.

This is one of the strongest points in favor of drinking apple cider vinegar.

A study showed evidence that vinegar could lower cholesterol. However, the study was done in rats, so it’s too early to know how it might work in people.

There was a similar observation done in humans where researchers noted that women who had vinegar-based salad dressings tended to have a lower risk of heart disease.

However, this could simply be correlation and not causation, and this study alone is not sufficient to say the vinegar was responsible for the lowered risk.

Finally, the added insulin sensitivity(which has been demonstrated in humans) also plays a role towards heart health.

A few laboratory studies have found that vinegar may be able to kill cancer cells or slow their growth. Observational studies of people have been confusing!

At this point, the studies are not really enough to get any conclusive data from. Apple cider vinegar may help in slowing cancer growth, but it is by no means an alternative treatment.

For thousands of years, vinegar has been used for weight loss. White vinegar (and perhaps other types) might help people feel full.

A 2005 study of 12 people found that those who ate a piece of bread along with small amounts of white vinegar felt fuller and more satisfied than those who just ate the bread.

Bloating is also heavily reduced. Not a weight loss factor per se, but psychologically lower bloating helps feeling like your diet is going places. Also, vinegar helps your body with much much better digestion.

The positive effects of vinegar: namely increased satiety and better insulin regulation will definitely help you stick to your diet, but dieting always was and always will be hard work.

You can’t expect to lose weight just by having a few teaspoons of vinegar!

When diluted 50/50 it is often used as a toner for the face. A bath of apple cider vinegar is said to reduce the effects of sunburn.

The vinegar soaked on a cloth and applied to sunburn may also be used. A reported treatment for warts is to soak the affected area for 20 minutes per day in a 50/50 mixture of vinegar and water.

Some people also tout apple cider vinegar as having a positive effect against dandruff. The recommended method is to massage diluted ACV into your scalp.

It does this by destroying the fungus Malassezia furfur and restoring the PH balance of the scalp.

Some people recommend applying a 50/50 mixture of water and vinegar, applying it to the scalp, and leaving it to dry.

Diverticulitis is the inflammation of small pouch-like structures that form in your intestines. The inflammation is commonly due to bacteria. The anti-microbial properties of vinegar may help in providing relief from this condition.

Ways to use apple cider vinegar

So how can you use apple cider vinegar? The easiest way would just be to add a little bit to your food. Some people like to dilute a little bit into a glass of water and drink it up.

Personally, I am not a fan of drinking overly sour apple scented water, but here are some other ways to get some ACV into your system:

I think the easiest way to get your hit of apple cider vinegar is to just splash some onto your salad. Vinaigrettes are really tasty and go well with almost any kind of salad. Just make ACV the main component of the vinaigrette!

Vinegar has been used for pickling for a long time mainly due to its acidity and ability to inhibit bacterial growth. If you’re a fan of pickling, consider using ACV as the main pickling ingredient.

Apple cider vinegar is a great way to marinate steaks or chicken, as the acidity of the vinegar and the sweetness of the apples gives a really interesting flavor.

Adding vinegar to your sauces will help tie in an acidic sweetness. It is like adding tomatoes, but stronger and with more zing!

Splashing a little bit of vinegar into a soup will give it a really nice kick and notch up the flavors. It’s also one of the easiest ways to get your “dose” of vinegar for the day. Plus, if the soup itself is quite strong, the vinegar will not overpower it.

Bake it into a cake

Check out this recipe for a vegan PB&J cupcake recipe

This vinegar helped me make these babes… so it can’t be bad!

Vinegar has been known to cause contact burns to the skin, and there have been cases where patients suffered skin burns due to improper handling of vinegar.

Due to the highly acidic nature of apple cider vinegar, it can also do some damage to your teeth. Tooth enamel can get worn away through prolonged exposure to acids.

In one study, tooth enamel from wisdom teeth was placed in baths of various vinegar and in just 4 hours, there was up to 20% loss of enamel.

Even though apple cider vinegar is generally considered beneficial in controlling blood sugar, it may worsen the situation for folks who suffer from gastroparesis, which is common in diabetics.

In gastroparesis, the rate at which your stomach empties is delayed, which can eventually lead to bloating, heartburn, and nausea.

In one study, people who drank 2 tablespoons of apple cider vinegar in a glass of water were observed to have food stay in their stomachs for longer than those who just had plain water.

One woman showed signs of osteoporosis even though she was much younger than the typical age symptoms would normally show at. One possible cause is that she regularly drank 8 ounces of apple cider vinegar per day.

Apple cider vinegar could theoretically interact with diuretics, laxatives, and medicines for diabetes and heart disease.

Apple cider vinegar is not a cure-all by any means, and it should be used in moderation. If you have any doubts, you should consult a doctor first!

Vinegar is certainly beneficial on the whole for your health and adding a splash of it into your salad, soup, or chicken will give some nice flavoring and provide you with its benefits.

On a semi-related note: Check out my Ultimate Guide to Natural Probiotics. 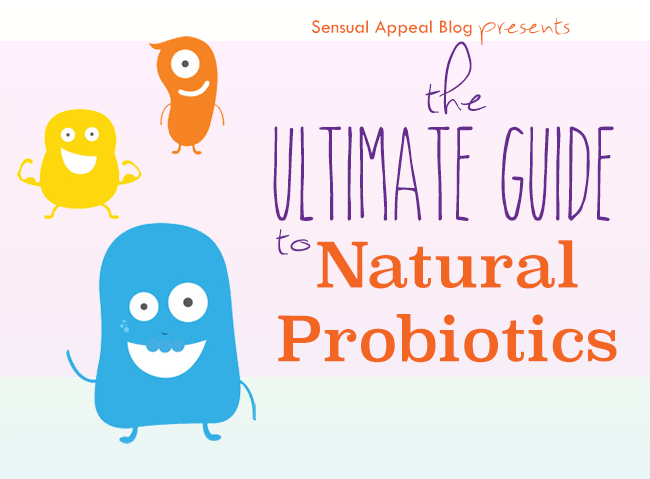 Leave your comments below!

Massage therapists are today focused on wellness and illness … END_OF_DOCUMENT_TOKEN_TO_BE_REPLACED

The global economy is under threat and facing a pandemic … END_OF_DOCUMENT_TOKEN_TO_BE_REPLACED

Our bodies are truly unique when it comes to protecting … END_OF_DOCUMENT_TOKEN_TO_BE_REPLACED

Everyone wants to look beautiful. Some people are blessed in … END_OF_DOCUMENT_TOKEN_TO_BE_REPLACED